The expansion of wholesale energy markets and renewable generation has resulted in a significant shift in how fossil generating assets are being dispatched. Steam and combined-cycle facilities that used to represent base and intermediate load generation are now being cycled more in response to increased wind and solar generation. Furthermore, simple-cycle gas turbines are being called on to quickly backfill and supplement this intermittent renewable generation.

This market shift has necessitated a renewed focus by owner/operators that are participating in these markets — or looking to join these markets — on the true cost to operate fossil-fueled facilities and how to increase flexibility to meet the demands imposed by intermittent renewable generation resources. Differing unit operations create different challenges that must be evaluated to properly capture the costs associated with operating these assets. 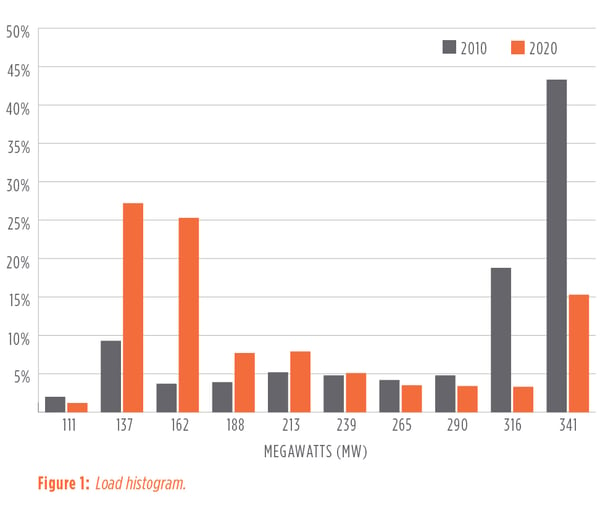 This shift in operations is coupled with significantly more unit starts because of economic shutdowns. Total starts on the unit increased from 15 in 2010 to more than 55 in the first nine months of 2020. This also illustrates the increases in different types of starts. Warm starts have increased from four in 2010 to 41 through September 2020. This surge in starts is most directly related to weekend economic shutdowns, when wholesale market pricing in the region is depressed due to low demand and high renewable penetration.

To properly and economically dispatch assets in wholesale power markets, owner/operators must be keenly aware of how variable unit parameters are impacted by changes in an asset’s dispatch profiles. Examples might include minimum load operations, increased starts and decreased operating hours. Most critical to this dispatch is a robust understanding of heat rate, fuel costs and emissions control chemical usage. Many asset owners and operators have a robust understanding of variable O&M costs at full load, but some do not know how this changes when the unit operates at minimum load or experiences significantly more start-and-stop cycles. As the previous example showed, this is becoming more important as dispatch of the unit has significantly shifted from baseload to minimum load with significantly more starts.

Another critical factor to properly dispatching these units is a robust understanding of startup costs, startup times and ramp rates. This ultimately drives shutdown decisions as owner/operators consider whether a unit can be brought down and back up in an economic manner that supports independent system operator (ISO) demand.

One item that can be hard to quantify, and thus is sometimes overlooked, is accounting for the major maintenance costs within startup costs. This is most typically overlooked for Rankine assets, because maintenance is based on the number of hours in operation, not thermal cycles. Damage from those starts still occurs in the steam turbine, steam turbine valves and thick-walled components (drums, headers, etc.) and should be accounted for.

Startup costs associated with increased operations personnel for relief shift support, as well as water usage and startup fuel, also need to be considered. Finally, startup times can also vary quite a bit between operation shifts. A robust understanding of best-case, average and worse-case start times for various start scenarios — hot, warm and cold — is necessary in order to competitively bid the asset to the ISO while seeing that every shift is able to achieve the required start time.

To remain competitive in wholesale power markets, many asset owners and operators have attempted to increase the flexibility of their assets. One lever at their disposal is a reduction in the minimum load, which reduces potential losses when market pricing is not conducive to operations and there is insufficient time to cycle the unit on and off before it is needed to support increased demand the next day. For example, the owners of the facility discussed above reduced its minimum load from about 175 MW to about 135 MW in 2019 — a challenging endeavor to achieve while maintaining emissions compliance and boiler dynamics, but one that rewarded the utility with increased flexibility. 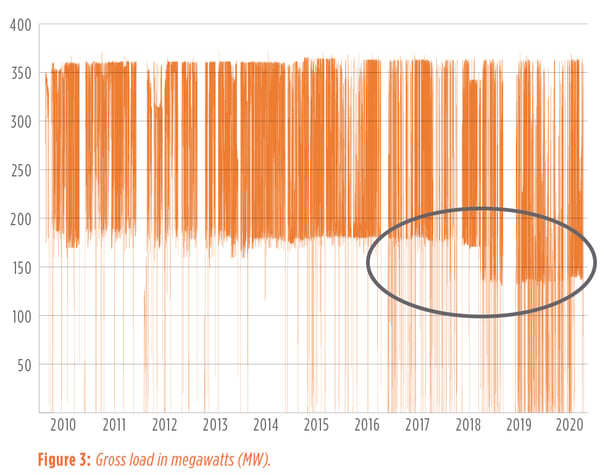 Another option to increase the flexibility of assets is to maintain warm or hot startup conditions on the boiler or steam turbine, rather than letting the components cool to cold startup conditions, which significantly increases the cost and time of a subsequent start. This is typically accomplished with the installation of steam sparging on the unit or steam turbine heating blankets.

Finally, with increased startups and shutdowns comes the potential for longer layup periods. Asset owner/operators should pay special attention to boiler and back-end steam conditions during layup periods to avoid corrosive attacks that could result in significant failure of major components.

Unit parameter testing and optimization studies, conducted by experienced specialists like those with 1898 & Co., can help owner/operators dispatch assets more competitively in wholesale power markets. We have observed dispatch inefficiencies for a number of assets, caused by incorrect expectations for startup costs, incorrect heat rates throughout the load regime, and underestimating startup times. With insights from our professionals, baselining and optimizing the unit parameters of assets can help dispatch units more economically within a wholesale electric market.

Renewable power and energy storage are changing the generation portfolio rapidly. Explore our white papers and case studies on integrating and working with intermittent resources.