Understanding the Effects of Incentives in the Renewable Fuels Market

The fuel refining business is in a state of flux, aligning with the broader energy transition to more renewable and decarbonized sources. As renewable fuels produced from vegetable oils and other agricultural feedstocks become a bigger part of the conversation, refiners are asking how a carbon tax in the United States might affect the market.

The reality is that the market is a complex blend of incentives and disincentives. In effect, the federal Renewable Fuels Standard (RFS) and more localized Low Carbon Fuel Standards (LCFS) are already imposing an indirect price on carbon. The energy transition will take many years to implement, but many producers and developers are already evaluating the feasibility and potential of diversifying their investments and overall portfolio strategies.

Several refineries across the U.S. ceased operations in 2020 because of the COVID-19 pandemic’s outsized impact on demand for refined products, especially jet fuel. Meanwhile, some new entrants to the market have announced plans for facilities specifically for making renewable fuels. As players in the oil and gas market consider making the switch from traditional refining to renewable fuels, there are aspects of the financial landscape that bear close consideration. Two primary credit mechanisms are incentivizing this behavior:

LCFS is arguably a more transparent method of seeing how a given fuel type is impacting the carbon balance of the transportation industry. It offers a more directly calculable view of the cost of different fuels.

One of the biggest challenges facing the market is the patchwork of standards resulting from states and other political entities setting their own rules. It’s complicated for a refiner to calculate the various incentives and mandates when it may be selling multiple fuels (propane, naphtha, jet, diesel) into multiple markets, where its product may have different values based on the way the laws are written.

Could a national, more uniform LCFS agreement be put into place in the future, establishing a minimum standard? While it would reduce paperwork, it would likely prove difficult to get so many markets and industries to accept a common standard beyond the existing RFS, which itself is expected to be updated or reset in 2022.

The U.S. does not apply a direct price to carbon in transportation fuels, unlike Canada, where a direct carbon tax offers a clear picture of the cost to consumers. Some industry observers believe the RFS can be effectively converted into a carbon price, calculating the implied cost of carbon based on the market prices of gasoline, diesel, renewable fuels and credit transfer pricing. 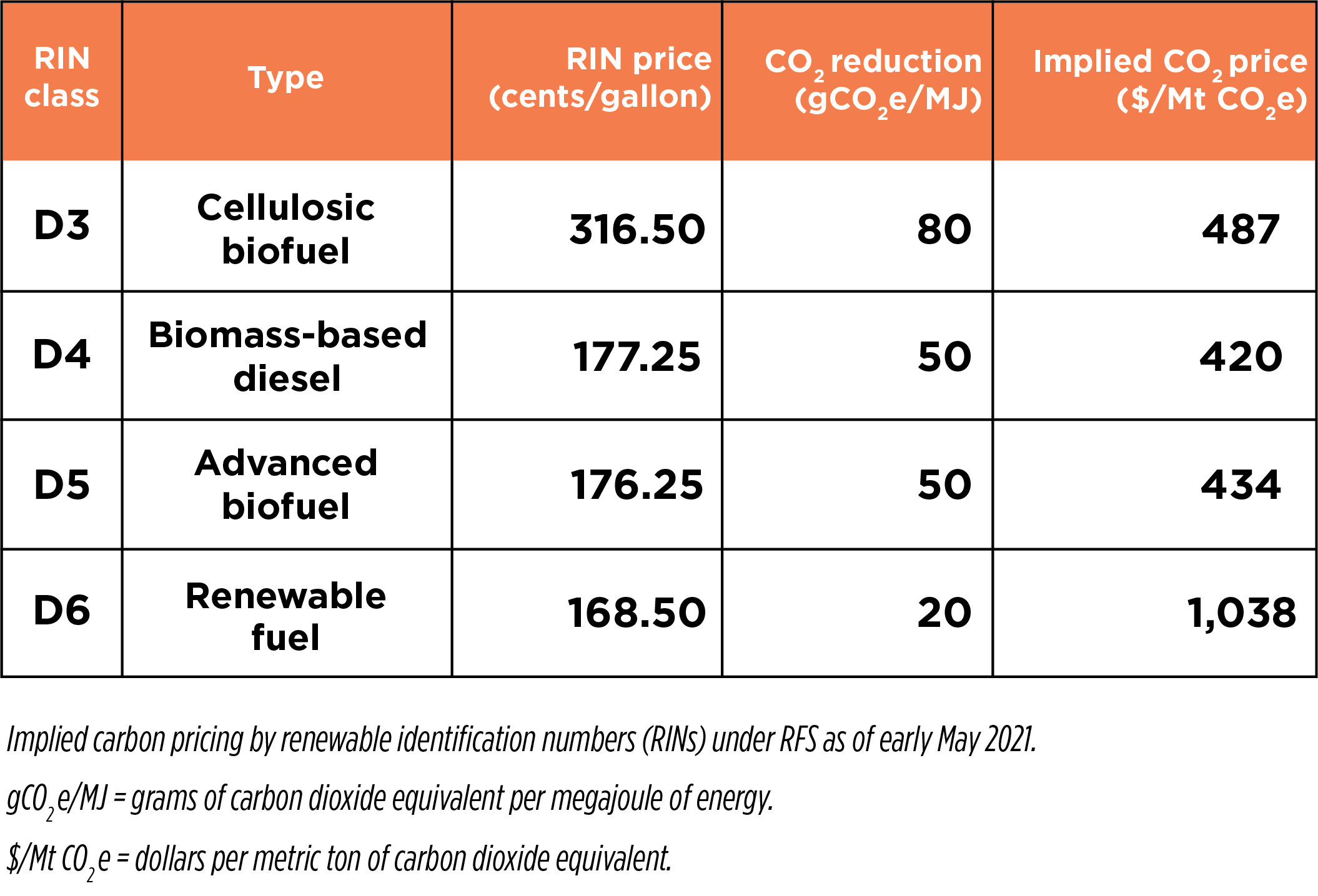 For those selling renewable fuels in the U.S., the credits from RFS and LCFS are additive. This lucrative proposition — in the near term — can make renewable fuels look especially appealing, and it may be inspiring the increase in announcements of facilities to produce them. The blender’s tax credit is also available to fuel producers through December 2022, providing an additional incentive for renewable fuel production.

The increased demand, both present and projected, may cause the price of renewable feedstocks to steadily increase as more producers enter the market and competition increases. However, as more producers are generating renewable fuels credits, the supply of those available credits can put downward pressure on the value of the credits as free market forces keep new investments in check.

As a practical matter, even though the U.S. does not have a direct carbon tax, there is an established track record of imposing a price on carbon in transportation fuels through programs like RFS and LCFS. Although those programs do not directly affect other energy industries, arguing that those industries would not pay a carbon tax seems counterindicated by the evidence of recent years.

Learn more about navigating the numerous sustainable solutions within the chemicals, oil and gas industry while generating a profitable, lasting portfolio.